When a stock goes public, it’s usually done with much fanfare through an initial public offering (IPO) or a direct listing.

But the reverse situation is known as a “delisting”—the process by which a company’s shares are removed from an exchange.

Delistings aren’t uncommon, but they’ve been in focus lately because some high-profile companies have been delisted—notably, several Chinese companies listed on U.S. exchanges. The bigger story is that those may only represent the tip of the iceberg.

As covered previously by Luckbox, a mass of similar delistings could unfold in the coming months and years as a result of regulatory pressures building in both the United States and China.

As most investors and traders are aware, the Chinese government has been cracking down on domestic companies since last year.

While the ultimate reasoning or goals for this regulatory crackdown aren’t clearly understood, it’s believed that the Chinese government is working to improve data control and security for Chinese consumers.

This effort has significantly impacted valuations in the Chinese stock market, especially within the technology (i.e. data-centric) sector. Since February, the KraneShares CSI China Internet ETF (KWEB) has corrected by roughly 60%.

Last year, Ant Financial found itself within the government’s crosshairs, and its forthcoming IPO was suspended by regulators. Ant Financial has yet to go public.

But Chinese companies are also being pressured by U.S. regulators, as well. In this case, the U.S. is merely closing a loophole that has allowed Chinese companies to list in the U.S. without strictly adhering to American auditing standards.

Congress recently closed this loophole as part of the Holding Foreign Companies Accountable Act (HFCAA), which in turn means that a mass of Chinese delistings could come as early as 2023 or 2024.

Stocks are typically delisted through two different mechanisms—voluntary and involuntary.

In the case of DiDi, the company elected on its own to delist its shares from the New York Stock Exchange (NYSE), making it a “voluntary” delisting.

However, when Luckin Coffee (LKNCY) was delisted last year, that was an involuntary process. Involuntary delistings generally occur when companies fail to adhere to “listing standards.”

Listing standards pertain to requirements such as share price, liquidity and market capitalization. Listing standards also encompass accounting and auditing standards, and in the case of Luckin Coffee, the company was delisted as a result of fraud.

While the process is similar for both voluntary and involuntary delistings, the reasoning behind a given delisting is important because the impact on a company’s underlying share price can be vastly different.

For example, in the case of Luckin Coffee, the stock plunged below $1/share because an involuntary delisting associated with the stigma of accounting fraud typically has an extremely negative impact on valuation.

Contrastingly, the announcement that DiDi would voluntarily delist had a less extreme impact on its underlying shares. DIDI shares dropped from about $7.80/share down to about $6.00/share in the wake of its delisting announcement on Dec. 2.

When Luckin first announced its accounting irregularities on April 2, 2020, the stock dropped roughly 80% in the ensuing trading session, from $26/share to $6/share.

Once a delisting occurs, most stocks continue to trade over-the-counter (OTC) with a different (but similar) ticker. In the case of Luckin, the stock’s shares currently trade under the ticker LKNCY for about $10/share—having climbed out of the sub-dollar-per-share depths. Luckin previously traded under the ticker “LK.”

While OTC trading allows the shares to remain active, it does represent a fairly big drop-off from a big board listing on the NYSE or the Nasdaq. Many financial firms are barred from trading or investing in OTC stocks, which means the profile and liquidity of an OTC listing will be greatly reduced as compared to a big board listing. 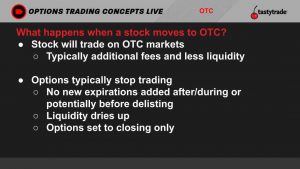 Investors and traders should also be aware that insufficient liquidity in OTC listings can also lead to wide (i.e. inefficient) bid-ask spreads.

Delisting Considerations for Investors and Traders

Clearly, a delisting—or a potential delisting—can be a significant development in the life of a stock, and for this reason, investors and traders need to carefully monitor news announcements related to this topic.

Generally speaking, investors and traders can protect themselves from potential delistings by trading high-quality companies, and avoiding companies with poor reputations. But as illustrated by DiDi and Luckin Coffee, unexpected things do happen in the market.

Once the risk of delisting arises, investors and traders usually have a range of available choices for dealing with this type of situation. At the top of the list, of course, is exiting all positions in a delisted (or potentially delisted) company.

In some cases, investors may also be given an option to exchange their delisted American shares for shares in the company that are traded in another market. For example, if a Chinese company had a dual listing in Hong Kong and the U.S., the investor might be able to exchange his or her American-listed shares for the Hong Kong-listed shares.

It’s also possible that a company going through a delisting might decide to buy back outstanding shares. In such cases, an investor or trader owning shares in the company may elect to sell them back to the company under this arrangement.

As one can see from the aforementioned information, every delisting is different, and market participants will need to weigh the available choices against their own outlook and risk tolerance when dealing with such situations.

To prepare for potential delistings, readers can review other historical delistings and use that knowledge to assist with ongoing decision-making. Along those lines, it may also prove fortuitous to monitor the continuing U.S.-China delisting story more closely in the coming weeks and months.

If the U.S. and China do negotiate some sort of truce regarding accounting/auditing standards, which removes, or reduces, the risk of a mass delisting, one would think that would result in a positive rebound in associated shares.

For more context on delistings, readers can review this previous installment of Options Trading Concepts Live on the tastytrade financial network. Additional information on the potential for mass Chinese delistings is also available via this previous Luckbox article.

For timely updates on everything moving the financial markets, readers can also tune into TASTYTRADE LIVE—weekdays from 7 a.m. to 4 p.m. CST—at their convenience.