Correlation sounds “mathy” but it’s actually a fairly simple concept and an important one for any investor or trader to master.

Correlation measures the degree to which two (or more) variables move in tandem.

One can easily see why an understanding of correlation is therefore important to investors and traders. Knowing the degree to which two stocks or two commodities are correlated provides greater insight into their respective behavior.

A broad-based understanding of market correlations can elevate one’s understanding of interconnected market activity—putting logic and fundamentals behind a market that might otherwise feel like a random “matrix” (red pill or blue pill, Neo?).

A mastery of correlation therefore provides a plethora of benefits, but it can be especially helpful when sizing up potential pairs trades.

For example, gold and silver share a historically strong, positive correlation. That means if one is moving higher in price, the other is likely doing the same, and vice versa.

Market correlations are typically expressed as a number between negative one and positive one. 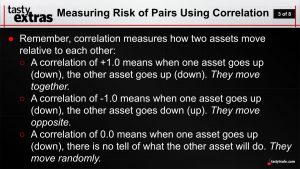 Aside from those categorizations, correlations can also be characterized as weak, semi-strong, or strong—depending on the degree to which a given two underlyings are linked.

In the case of gold and silver, the long-term average correlation between the two precious metals is roughly 0.89, which is why their relationship is typically characterized as a strong, positive correlation. And when it comes to creating the highest probability pairs trades, the stronger the correlation the better.

As established previously, an understanding of correlations is important because it can provide market participants with a better understanding of why certain things are happening in the market.

For example, if a macro event were to catalyze a big spike in the price of gold, investors and traders would be able to easily extrapolate why silver prices were also screaming higher—likely due to the strong, positive correlation between the two precious metals.

Along those lines, a breakdown in well-established (and well-known) correlations can also provide market participants with important color on market developments.

Case in point, the price of gold rallied hard last spring amid the onset of the global COVID-19 pandemic. However, at that time, silver prices weren’t moving in tandem with gold prices to the same degree as usual. With gold rallying hard, and silver trading mostly flat, many investors and traders were clued into the fact that a potential pairs trade was developing.

Traditionally, pairs traders use a gold-silver pair (short one, long the other) when correlation breakdowns occur. To track such breakdowns, most precious metals market participants monitor the Gold-Silver Ratio.

For example, at the start of 2020, when gold was trading for roughly $1,620/ounce and silver was trading for $22/ounce, that meant approximately 74 ounces of silver were required to purchase a single ounce of gold.

But after the furious rally in gold prices early in March and April, the Gold-Silver Ratio skyrocketed to an all-time high of 115.37—a 55% increase from where it started in 2020.

Traditionally, pairs traders sell gold and purchase silver when the Gold-Silver Ratio reaches the upper bounds of its historical range. Such a position theoretically benefits from a drop in the ratio—requiring gold to go lower, silver to move higher, or a combination.

Interestingly, silver prices did “catch up” to gold prices later in the year, which ultimately pushed the Gold/Silver Ratio back down from multi-year highs—much to the pleasure of those holding the long silver and short gold pairs trade.

At this time, the Gold-Silver Ratio is trading right around 70, which is slightly above its historical mean of 60, and well off the record highs observed last year (as illustrated below).

The behavior of gold and silver in 2020 provides a clear illustration of how a mastery of correlations, or breakdowns in correlations, can be used to find potential opportunities in the marketplace.

The foundation of pairs trades, as observed in the gold-silver example, is that a strong positive or negative correlation has been established between two underlyings over a long period of time. Pairs trading opportunities typically present themselves after those correlations breakdown. In 2020 that approach worked to perfection.

However, as discussed recently on a new episode of Tasty Extras on the tastytrade network, it’s important to recognize that correlations don’t provide a guarantee that a pairs trade—like the one involving gold and silver—will work 100% of the time.

Instead, strong historical correlations, whether positive or negative, provide the foundation for market participants to consider potential trades, because a trade based on strong correlations has a higher probability of “winning” as compared to a pairs trade involving uncorrelated underlyings. 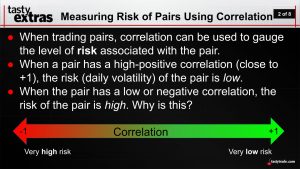 Basically, if there’s no discernible correlation between two underlyings, there’s no way to enter into a pairs trade involving the two with a high degree of confidence in the potential outcome.

Correlations therefore serve important sign posts in the market, pointing out pockets where higher probability pairs opportunities might be hiding. And also helping to inform market participants on what’s happening in the market, and why.

To learn more about pairs trades, correlations and the link between them, readers are encouraged to review the tastytrade programming highlighted below:

To follow everything moving the markets, readers are also encouraged to tune into TASTYTRADE LIVE, weekdays from 7 a.m. to 4 p.m. CST.

Offer extended through April 1st: Subscribe to Luckbox in print and get a FREE Luckbox T-shirt!