Interest rates are on center stage in the financial markets this year because many of the world’s central banks are normalizing rates (i.e. increasing them) as the global economy rebounds from the COVID-19-induced economic crisis.

Prevailing rates play a direct role in the price of treasury yields, which is why that trade has been especially active in 2022. For example, the U.S. 10-year Treasury yield has rallied significantly in the last five months—jumping from 1.66% at the start of 2022 all the way to 2.76%, at present.

That’s why interest rates have their own Greek, referred to as rho.

The Greeks are five parameters which include delta, gamma, theta, vega and rho. Each Greek describes a different dimension of risk in an option’s value.

Delta is arguably the best-known Greek because it reports on the sensitivity of an option’s value to changes in the associated underlying stock. This is critical because ultimately all market participants want to understand why they are making or losing money as a result of moves in the underlying

The delta of an option tells us how much the value of our option will change for every $1 move in the underlying security.

Theta, on the other hand, is the Greek that measures the rate of change in an option’s theoretical value relative to the passage of time. This concept is often referred to as “time decay,” because all else being equal, options lose value as they get closer to expiration.

For example, if an option is worth $1 with five days until expiration, the theta of that option might be equal to $0.20. That means for each day that passes, the option will theoretically lose $0.20 in value per day.

Rho in the Options World

Mathematically, rho represents the amount that an option will gain or lose in value for every 1% move in interest rates.

At present, benchmark interest rates in the U.S. are 0.75% after leaders at the Federal Reserve raised rates by 0.50% during their most recent meeting in early May.

The Fed’s next meeting is scheduled for June 14-15, and it’s expected that the U.S. central bank will hike benchmark rates by another 0.50% at that time.

For traders of near-term options, the upcoming rate moves likely won’t be a huge impact, but active traders of longer-dated options—such as Long-Term Equity Anticipation Securities (aka LEAPS)—may want to keep rho in mind when making trading/investing decisions in this environment. 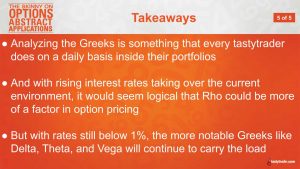 To learn more about how rising rates affect the options universe, review a new installment of The Skinny on Options on the tastytrade financial network. For more background on the other Greeks, check out this episode of Options Jive.

To follow everything moving the markets this summer, readers can also tune into TASTYTRADE LIVE.

make your own
luck