One of the biggest market stories in 2021 undoubtedly revolves around the rebound in American agricultural commodity prices.

While many market participants are likely well aware of the spike in lumber and crude oil prices, fewer are probably aware that agricultural commodities such as corn and soybeans have also skyrocketed in recent months.

The rise in soybean prices is especially notable, because this product was one of the poster boys of the ongoing U.S.-China trade war, which appears to have cooled in recent months. At the outset of the trade war, soybean futures dipped to 10-year lows as China responded to American tariffs by boycotting the purchase of American-grown agricultural products.

However, soybean prices have mounted a jaw-dropping reversal since the summer of 2020. Starting in August of last year, soybeans rallied from roughly $9.00/bushel all the way to $16.50/bushel this May—an increase of 83% over that period.

One key catalyst during this run has been a pick-up in buying from Chinese importers, a group that has been steadily ramping up purchases of American farm products since the new U.S.-China trade deal was implemented in January 2020.

Aside from increased purchases from abroad, the prices of some American agricultural commodities have also benefited from the drought that is currently raging around much of the United States. Due to lower than average rainfall, crop harvest projections have been reduced—meaning that supply concerns have contributed to higher prices.

Fortunately for American growers, rainfall did arrive in mid-June, which in turn improved crop yield expectations. As a result, soybean and corn prices—two of the more visible American “ags”—have reversed slightly from their recent peaks.

Currently, soybeans are trading for roughly $14/bushel, while corn has declined from its peak of $7.30/bushel to roughly $6.60/bushel. 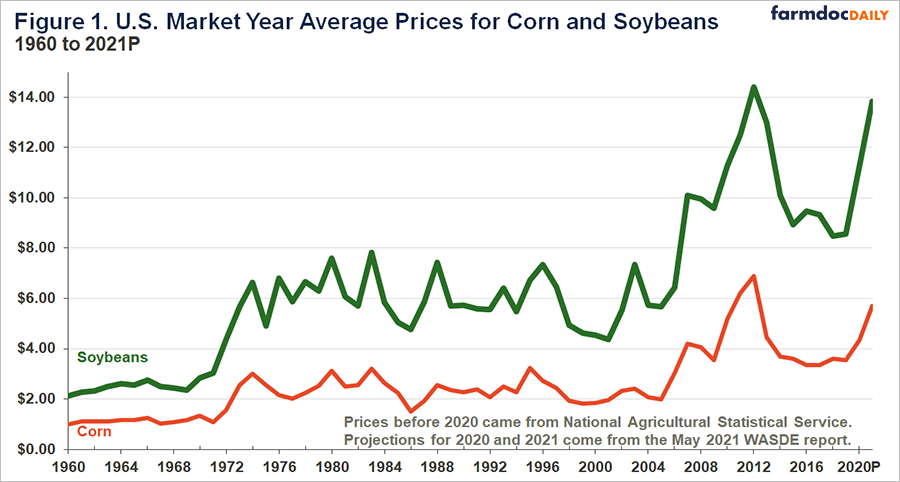 Regarding the trade war, China remains behind on its trade deal commitments, but not as far behind as it was last year. Since the start of spring, the Middle Kingdom has put through numerous big ticket purchases of American farm production.

Prior to the trade war, American agricultural products made up roughly 25% of total Chinese ag imports. But during the trade conflict, that number dropped significantly in 2019 and 2020. Today, that number is closer to 15%. However, given the pickup in Chinese buying this year, things now appear to be moving back in the right direction.

Soybeans are a great barometer for the overall health of the U.S.-China trade relationship because they constitute such a large percentage of the overall export market to China. American-grown soybeans represent about 30% of total Chinese imports of American farm products.

The figures below, which detail Chinese imports of American soybeans (by year and tonnage), illustrate how severely the height of the trade war (2018-2019) impacted the American agricultural sector:

The above figures emphasize how vital Chinese buyers are to the underlying price of U.S. soybeans. Especially when one considers that American soybean prices dropped to a 10-year low during that 2018-2019 window.

Going forward, the state of U.S.-China trade relations will undoubtedly continue to heavily affect the price of soybeans—as will the ongoing drought situation.

The same could be said of other American agricultural exports in which the Chinese are heavily involved, such as corn, wheat, pork, poultry, tree nuts, hay, beef, peanuts and pulses.

Investors and traders seeking to learn more about the soybean futures trade may want to review this previous episode of Futures Measures. Outside of futures, market participants can also access agricultural exposure through exchange-traded funds (ETFs) such as the Teucrium Corn Fund (CORN), the Teucrium Soybean Fund (SOYB), and the Teucrium Wheat Fund (WEAT).