The investment and trading landscape has changed dramatically in recent years as trading interest and volume have spread from traditional products, such as stocks and bonds, to emerging asset classes like cryptocurrencies.

Moreover, investors and traders have also increasingly spread their wings outside the financial markets to express opinions on political and sports outcomes.

Along those lines, old-school products on Wall Street are also being reimagined and repackaged to allow for improved access by the retail trading community. Yields provide a great example of such efforts.

For example, market participants have historically used bond futures to express opinions on interest rates. That’s a bit like trading peanut butter to access the raw peanut market—a close approximation, but not the real thing.

These days, thanks to innovations at emerging trading exchanges like the Small Exchange, market participants can trade pure Treasury yield exposure with products like the Small 10-Year U.S. Treasury Yield (S10Y). That means an investor or trader expecting Treasury yields to rise can easily express that opinion by simply purchasing the S10Y.

As a reminder, yields such as the 10-Year Treasury report the ongoing percent of interest paid on a U.S. government bond, with 10 years to maturity. Yields generally fluctuate based on the strength of the economy. So when the economy is in recession/depression, they generally move lower. And during periods of economic strength (or an economic rebound) yields generally move higher.

Case in point, the U.S. 10-year yield dropped to its lowest level in history last March—down to 0.54%—on fears relating to the effect of the COVID-19 pandemic on the global economy. But as the economy has recovered, the 10-Year yield has since that time rallied back to about 1.56%, where it sits currently. 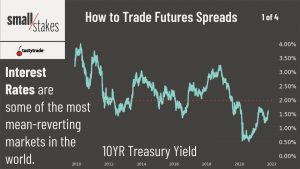 Considering this broader context, it’s easy to see how market participants can use a product like the Small 10-Year Treasury Yield to express an opinion on the direction of the underlying economy—or as a hedge for a position or the overall portfolio.

For example, an investor holding a large portfolio of bullish stock positions might take a short position in the S10Y to protect against further deterioration in the U.S. economy, which could adversely affect their portfolio of stocks.

Notably, the long-term average in the 30Y-10Y spread (aka the “NOB spread”) is about 0.52%, meaning that the current levels in the spread don’t necessarily offer a good entry point. When the spread moves to an extreme—well below or above the historical average—that’s usually when yield traders get active in the market.

For example, looking back to February 2021, the NOB was at 0.84%, suggesting there may have been an opportunity to deploy a position intended to make money on a reversion of the spread back toward its long-term average. That would involve buying the 10-Year Treasury yield versus selling the 30-Year Treasury yield—a position that would have benefited as the spread dropped from 0.84% to its current level of 0.52%.

An example of the NOB spread being executed on the tastyworks platform is highlighted in the graphic below. 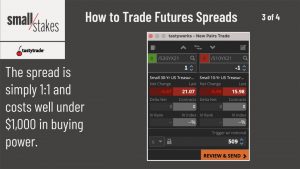 Readers seeking to learn more about trading yields may want to review a new episode of Small Stakes on the tastytrade financial network.

For timely insights on everything moving the markets, readers can also tune into TASTYTRADE LIVE—weekdays from 7 a.m. to 4 p.m. CST—at their convenience.