That aside, mergers and acquisitions (M&A) are one type of corporate action that can be extremely profitable for long option holders—depending on the position taken and the ultimate price of the associated merger/acquisition.

Mergers and acquisitions both refer to the joining of two separate companies, but under different circumstances. Mergers occur when two different companies combine to create a new joint entity. Acquisitions, referred to synonymously as “buyouts,” involve the takeover of one company by another.

From an investment and trading perspective, it’s buyouts that usually make the bigger splash in the markets because the acquirer traditionally pays a large premium in these situations. Announced deals, and even rumors of a potential deal, can therefore catalyze outsized gap moves in the stock of target companies.

Buyouts are usually executed with all cash, all stock or a combination of both. But regardless of the method utilized, the total price paid for the company is the most important part of the deal. 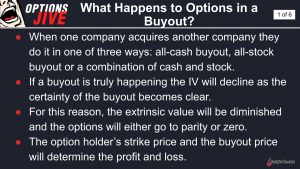 Option spreads, such as long straddles and long strangles, can also perform well in a buyout, as those positions tend to produce attractive returns when stocks make unexpected gap moves.

Along those lines, the primary concern for all market participants in a buyout situation is the amount paid for the company being acquired—that amount ultimately dictates where the underlying stock of the acquired company will trade. Looking at a hypothetical example, consider that stock XYZ is trading $15/share in the market, and is subsequently acquired for $20/share.

That announcement would likely be welcomed by long call owners, assuming these investors and traders owned options contracts with strike prices below $20. For example, a market participant that had purchased the $15 strike calls for $1.00 would benefit greatly, because everything above $16 ($15 + $1 = $16) would represent a profit (assuming the calls were not hedged delta neutral).

Obviously, a short put holder doesn’t benefit to the same degree as a long call holder in a buyout situation.

When it comes to options premium, one of the most important considerations from a buyout is the fact that the announced deal essentially removes any remaining uncertainty from the value of the underlying shares. The caveat is of course the possibility that the deal breaks, or that another bidder enters the equation.

Minus those scenarios, the extrinsic value of the option’s value will generally bleed away after a buyout is announced, leaving only the intrinsic value to trade in the options marketplace.

It can help to think about intrinsic value as the amount an option would be worth if it instantly expired. Extrinsic value, on the other hand, is the term used to represent any value in an option beyond the extrinsic value.

Buyouts instantly clarify the intrinsic and extrinsic values of options because such events essentially serve as a type of expiration—transforming all options into either in-the-money (ITM) or out-of-the-money (OTM) options. Again, that occurs because the time value (i.e. extrinsic value) has been for the most part eliminated. 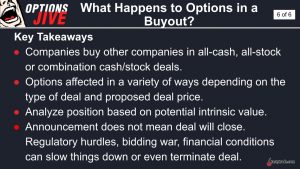 To learn more about the trading behavior of options in M&A situations, readers are encouraged to review a new installment of Options Jive on the tastytrade financial network.