Last week, Nvidia (NVDA) became the biggest name to follow suit. On July 20, Nvidia completed a 4-for-1 stock split, executing on a plan that was announced back in May 2021.

Stock splits occur when companies break up existing shares to create a higher number of lower-value shares. The intent of a split is usually to make shares more affordable to a wider pool of market participants, which in turn can improve the liquidity of the shares in the marketplace.

Nvidia has transformed into one of the hottest names in the tech world as global gamers and cryptocurrency miners have flocked to their offerings. More recently, the chipmaker has been making waves in the artificial intelligence and data center sectors.

Nvidia’s impact on the chip industry is underscored by recent performance in its underlying stock. Shares in NVDA are up roughly 50% so far in 2021, and were trading about $750/share prior to the split.

Nvidia announced in late May that it would execute a 4-for-1 stock split on July 20, which essentially meant that after that date, an investor holding one share of NVDA worth $750, would hence own four shares worth $187.80. Stock splits only impact the number of shares trading in the market, not the overall market capitalization of the company.

The ultimate impact of a stock split tends to vary widely—meaning there’s no guarantee on price direction after a split. But for extremely popular stocks, splits are often perceived as a positive, because they effectively lower the price per share, making them more accessible to a wider pool of market participants.

Stock splits are a form of “corporate action,” and while that term may not sound too riveting, some of the most dramatic moves on Wall Street can usually be tied back to corporate actions.

Mergers and acquisitions are great examples of corporate actions, and such events can be tectonic in terms of their impact on the companies in question, the industry, or even the market as a whole.

Corporate actions generally constitute any activity that causes a material change in an organization. More directly, it might be said that corporate actions impact stakeholders—whether they be shareholders or bondholders—and often in dramatic fashion.

It should be noted, however, that bullish movement is far from guaranteed after a corporate action is announced. For example, the tastytrade network has conducted extensive research on stock performance after stock splits, and some findings from that comprehensive analysis are highlighted below. 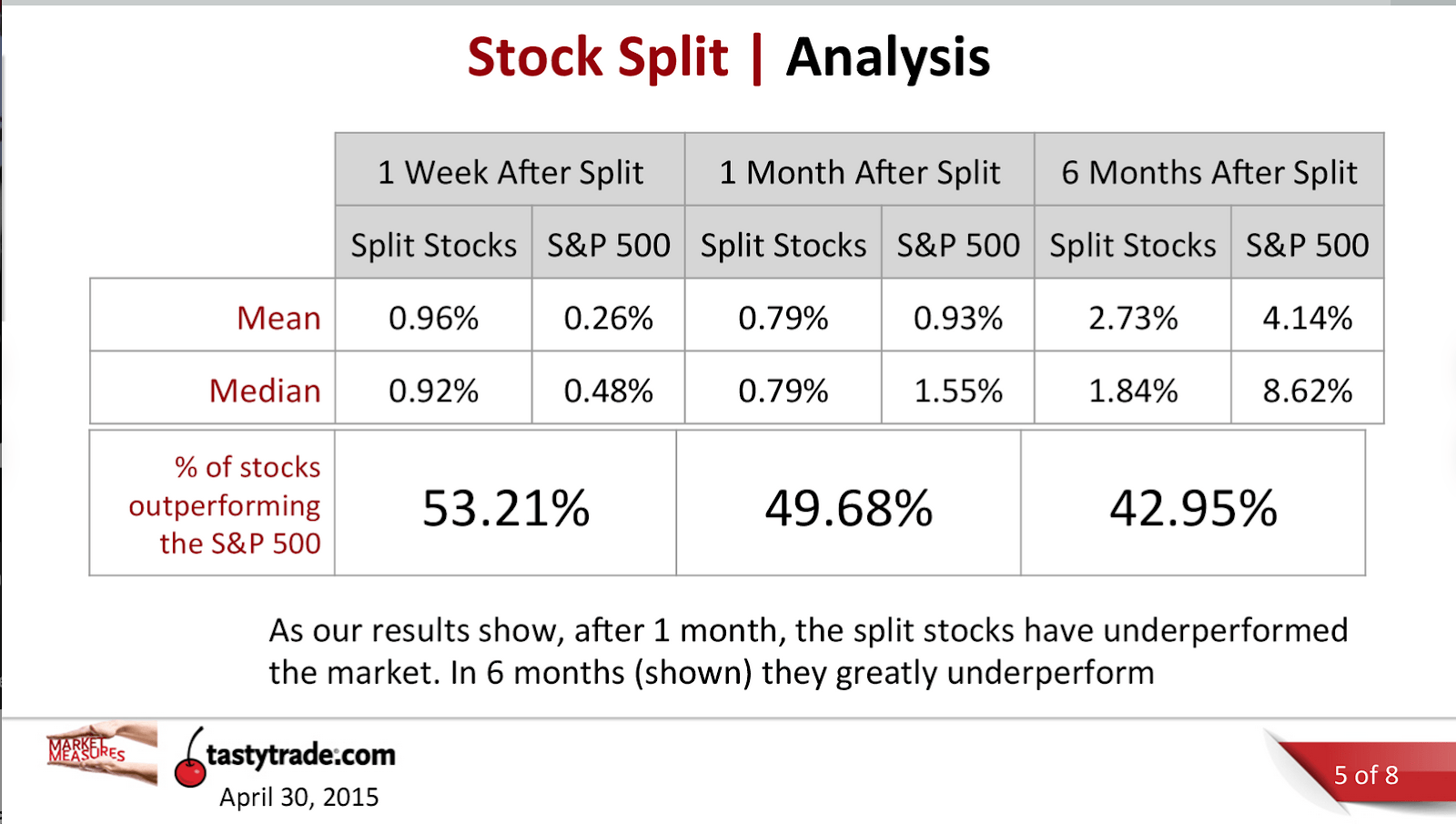 As shown above, stock splits—like any corporate action—don’t guarantee anything when it comes to future performance in the underlying shares.

Having said that, the two tech behemoths that executed splits last year have seen their shares perform well in the time since. Apple shares are up roughly 29% since its shares were split last August, while Tesla shares have rallied 49% since those shares were split (also last August).

Investors and traders should further note that Nvidia is scheduled to announce earnings on Aug. 18.

Readers can learn more about stock splitting by tuning into a new episode of Options Trading Concepts Live. A past episode of Market Measures—focusing on the historical performance of AAPL shares after previous splits—is also recommended.