Singing with immense vigor, Bendigo Fletcher frontman Ryan Anderson coated his mic with spittle as the stage lights changed from a warm red to a soft yellow glow last night at The Sinclair in Cambridge, Massachusetts.

The Louisville, Kentucky-based band performed every song from their newest EP, Wingding, for the packed room. It was the night before the recording’s official release today—Oct. 21.

Anderson’s broad vocal range initiated a rollercoaster of reactions from the crowd, changing their energy to match his at any given moment. 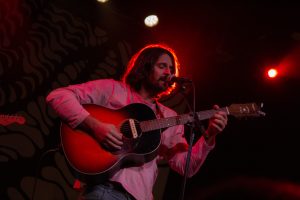 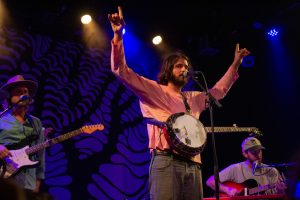 Wingding comes after their debut album release, Fits of Laughter, last year. After the band’s set, Anderson expressed great pride in the EP during an interview near the merchandise booth.

After three years of writing and releasing music in the midst of the pandemic, the band feels the four songs encapsulate a more positive, fun and carefree tone, Anderson said.

“The songs on the EP definitely have a more whimsical flavor than usual,” he added.

The EP’s name refers to a lively event or party, indicating Bendigo Fletcher’s readiness to make the process of writing, recording and performing their music more relaxed and fun.

This was also the first time the band didn’t hold themselves to recording, mixing and producing the body of work in one place with the same people. The songs feel so different from each other but fit together in the greater context of style.

Anderson credits the band Big Thief for changing his mindset on his approach to recording and noted their most recent album, Dragon New Warm Mountain I Believe in You, is credited to multiple recording studios, producers and mixers.

“That album was a huge rebirth for me musically,” Anderson said. “We’ve now been trying to just fly by the seat of our pants. We’re happy with whatever works out and feels good to us.” 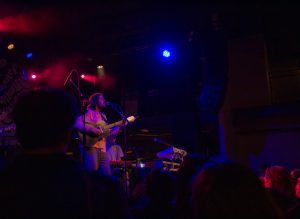 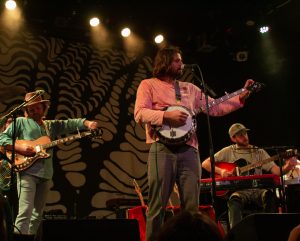 Despite having released only two songs from the EP before the live show, the audience didn’t miss a beat in grooving and cheering along to the other two. And they just about lost it when the band moved on to their older tunes. There’s nothing better than when a musician brings out a banjo to capture the attention of the crowd.

Using three guitars on some songs, Bendigo Fletcher produces the sound of a full band. They understand the intricacies of differing chords, melding genres like American, alternative rock, psychedelia and soul—making melodies that are truly their own.

But, they also understand the power of silence in music. To end the show, the band closed with their song Wonderfully Bizarre, a five-minute tune that varies rapidly in tone. It starts off slow and soothing and gradually leads up to a chorus booming with a three-part harmony that begs fans to sing along. But the buildup has a moment when everyone in the band stops what they’re doing—the vocals cease, the rhythm hums to stop and the percussion goes mute. For a few seconds, everyone rejoices in the beauty of no sound, reflecting on what came before and what’s still to come, before ramping up the tunes again.

Despite being the opener that night for singer-songwriter Madison Cunningham, the room felt like it completely belonged to Bendigo Fletcher.

Touring with Cunningham for the past few weeks has been quite the inspiration for the band, Anderson said. He noted her innovative nature in guitar playing and her refreshing skill in songwriting. After opening for a few bands this year, Bendigo Fletcher is riding on those inspirations for a fall/winter run of headlining shows.

Anderson noted it’s difficult for him to truly pin down the band’s inspirations, though, because he’s not quite sure those musicians or genres shine through in the band’s sound. But at the moment, he’s enjoying more instrumental music.

Keep up with the band and their touring schedule for the rest of the year here.

Start with Bendigo Fletcher’s song Sugar In The Creek. Anderson said the song represents curiosity, and the fact of not knowing much of anything but being okay with that.

Pay attention to the song’s progression. Anderson said it’s not instantly gratifying—it’s folky and poppy, but he said listeners have to be a little patient to get to the peak of the song.