After bursting onto the scene earlier in 2021, the market for NFTs (non-fungible tokens) remains hot.

Since NFTs were first conceived in 2015, it’s now estimated that buyers have ponied up billions of dollars—or billions worth of cryptocurrencies, rather—to own these digital assets.

However, evidence from the NFT market also demonstrates that price volatility in the space is also extremely high, which probably isn’t a great surprise, given the immature nature of the market.

So What Are NFTs, Exactly?

Much like cryptocurrencies, NFTs are digital assets that exist on a blockchain.

Blockchain technology is maintained by a group of networked computers that essentially serves as a public ledger—allowing anyone to verify a digital asset, and the asset’s owner.

NFTs effectively represent the expansion of blockchain technology beyond cryptocurrencies, and into other digital assets. In that regard, an NFT essentially serves as a certificate of ownership—to which any type of digital file can be attached.

NFTs can be songs, images or videos—or any other type of digital object that might ultimately be conceived.

NFTs are most commonly associated with digital art. And by memorializing a piece of digital art on the blockchain, clear provenance is created about the object’s creator and the current owner—as well as its history of ownership, and the prices paid along the way.

It’s easy to see the immense value of NFTs for digital creators.

The auction house Christie’s brought global attention to the NFT art market earlier this year when it auctioned a piece of digital art created by the artist known as “Beeple.” The piece—known as Everydays: The First 5,000 Days—ended up selling for an astounding $69 million. 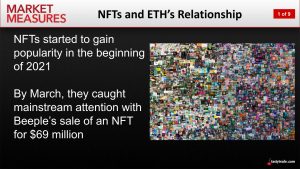 In that case, the piece was sold directly by the artist, which means minus any commissions/fees charged by the auction house, all that cash went directly into Beeple’s pocket. And because it was a digital NFT, that means the sale was memorialized on the blockchain—indicating the artist, the new owner and the price paid.

Notably, NFTs also have a built-in royalty system that allows digital artists to earn money each time their NFT trades hands. That means if Beeple’s Everydays trades hands again, Beeple would receive a cut of that future sale, too.

With NFTs, the artist is typically given a chance to designate his or her desired royalty amount when a piece of digital art is put up for sale or auction in an NFT marketplace. The average royalties are between 5-10% of an NFT’s value.

But the collectibles category also includes non-sports collections, such as the Bored Ape Yacht Club, CryptoPunks and CryptoKitties, which are some of the most sought-after NFTs (and most expensive) in the world.

About that NFT Price Volatility

NFTs are usually paid for using cryptocurrencies, which helps explain why NFTs are sometimes referred to as “crypto art.” And that relationship obviously creates a strong correlation between these two digital asset categories.

Considering that connection, it shouldn’t come as a shock to hear that the NFT market can be extremely volatile, much like the cryptocurrency market.

That means one might observe astronomically high prices in the market, as well as rapid appreciation in the values of these nascent-stage assets. But it also means there are cases in which the introduction of a new NFT collection isn’t well-received, and instances in which NFTs decline in value—at times precipitously.

Considering the immature nature of the NFT market, that degree of volatility isn’t necessarily unusual. What’s most important is that investors and traders understand that not every NFT is guaranteed to produce a profit.

That disclaimer aside, one NFT collectibles collection that’s seen a lot of success is the “Bored Ape Yacht Club” (BAYC). That collection comprises 10,000 ape-themed images and was first launched in April of this year. Since that time, BAYC NFTs have seen a sharp appreciation in value.

That’s an astounding return on investment by any measure. The fact that the BAYC collection boasts celebrity owners such as Steph Curry and Jimmy Fallon certainly hasn’t hurt its fortunes.

Today, the Bored Ape Yacht Club is second in average value only to the “CryptoPunks,” which is a collection of 10,000 8-bit avatars created in 2017. These days, the cheapest CryptoPunk NFT trades for about $500,000.

For context, one NFT from the CryptoPunks collection—known as “CryptoPunk 1422″—sold at the end of October for $2.01 million (shown below). It was originally purchased four years ago for $74.

But there are also examples where new collections have flopped, and plenty of examples in which NFTs have declined in value over time, too.

For example, the musician Grimes released 303 NFTs from a collection known as “Earth” last February. At the time, the minimum cost to own one of these NFTs was $7,500. But one of them recently traded for $1,200, representing an 84% decline in value.

A collection released by celebrity talk-show host Ellen DeGeneres saw even weaker demand. Sales of that collection—known as “Woman with Stick Cat”—were so weak that half of the NFTs never found a buyer.

A much-ballyhooed NFT collection created by the wrestler John Cena also flopped in monumental fashion. That collection of 500 NFTs was first offered at $1,000 a pop, but only 37 of the 500 NFTs ultimately found a home during the initial sale.

These examples help illustrate that much like the traditional art and collectibles markets, valuations in the NFT market are highly dependent on the relative popularity of a given artist, or collection. And NFT trends aren’t exactly easy to predict or understand.

Similar to other art/collectibles mediums, one person’s NFT treasure might be another’s NFT trash—and vice versa. One never knows what sector of the market might get hot, or cold. And for this reason, investors and traders should tread carefully when dealing in NFTs, much like any other nascent-stage investment category.

Check out the October Luckbox for the complete guide to crypto and NFTs. 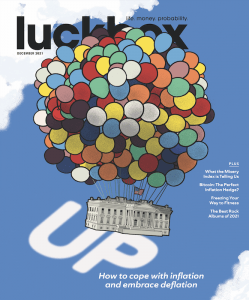 To learn more about the strong link that exists between NFTs and cryptocurrencies (particularly Ethereum), readers are encouraged to review a previous installment of Market Measures on the tastytrade financial network.