Existing stock positions can be easily combined with options, and the addition of new layers to existing positions is often referred to as a “leg” or a “wing.”

In this context, “legging” refers to a multi-pronged trade that is deployed in different stages (two or more). Legging is extremely dynamic and can be used to increase risk or to reduce it.

For example, if a trader was short naked puts in a given stock, he or she could increase risk in the position by legging into a short call in the same expiration period. Doing so would transform the naked short put into a short strangle—involving a short put and a short call.

Strangles always involve two different options (a put and call) with different strikes from the same expiration. Short strangles are constructed by selling both the call and the put, while long strangles are executed through the purchase of both options.

In this hypothetical example, the trader legged into a short strangle by adding a short call to an existing short put. Short strangles can be ideal when a trader expects the underlying price of the stock to trade between the respective strike prices of the strangle.

So if hypothetical stock XYZ was trading for $20/share, and a trader sold a strangle involving a short $18-strike put and a short $22-strike call, the position performs optimally if the underlying stock trades between $18 and $22.

And while this example involves the addition of more risk to an existing position, an investor or trader can also use a leg to reduce risk in a given position. When used in this context, the new layer (or leg) of the position is often referred to as a “wing.” 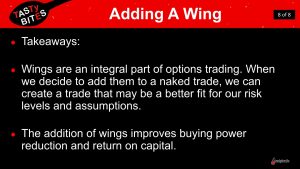 Looking at the previous example, a short strangle is a position that involves an undefined degree of risk. That’s because the maximum potential loss of a short strangle is theoretically unknown. Investors and traders can use wings to transform undefined risk positions into defined risk positions, and in the process remove the risk of unlimited losses.

In the case of a short strangle, an investor or trader could add a long strangle (further from at-the-money) to transform the short strangle into a defined risk position. In this usage, the long strangle is represented by two protective wings which serve to remove the risk of unlimited losses.

After the addition of that protective strangle, the original short strangle is now protected from potentially devastating losses should the underlying stock make a gap move below $15, or above $25. Of course, the additional long strangle also comes with a cost. 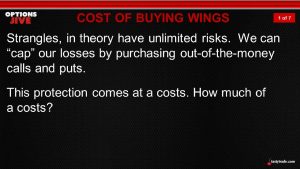 To learn more about the mechanics of protective wings, readers are encouraged to review a new installment of Tasty Bites on the tastytrade financial network. This previous episode of Options Jive is likewise recommended, as it focuses on the cost of buying wings.

For more information on “legging in and out of trades,” this installment of Market Mindset should also prove useful. And to follow everything moving the markets, TASTYTRADE LIVE—weekdays from 7 a.m. to 4 p.m. CST—is also recommended.