Investors and traders new to the options world often start with strategies like covered calls, straddles and strangles. But as one’s experience grows, many then expand their repertoires to include more advanced strategies like vertical spreads, butterfly spreads and even ratio spreads.

For example, when purchasing a straddle, the maximum potential loss is the amount of options premium paid to enter the position. Due to their riskier profiles, investors and traders that are new to options tend to avoid positions with undefined risk.

But as one grows more comfortable in the options arena, it’s natural to seek out more advanced positions—assuming they match one’s market outlook and risk profile.

One way that investors and traders “graduate” to more advanced options positions is through the ratio spread. Technically, any spread that involves at least two different legs, and a non-symmetrical number of contracts traded on each leg, falls under the umbrella of a “ratio spread.”

However, the term ratio spread most often refers to a vertical spread that is composed of a non-symmetrical number of contracts on each leg of the trade—for example a 1-by-2, a 2-by-3, or a 1-by-3, as outlined below. 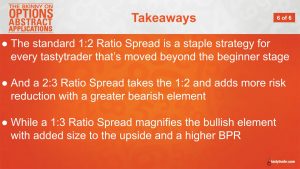 The difference between ratio spreads and other options strategies centers on the fact that ratios are not deployed in the usual 1-by-1 fashion.

As the name implies, ratio spreads are deployed in a less symmetrical fashion—typically involving a 1-by-2 structure. A common ratio spread approach involves buying 1 at-the-money (ATM) call and selling 2 out-of-the-money (OTM) calls—normally referred to as a “call ratio front spread.”

While 1-by-2’s are the most commonly deployed ratio spreads, one has to keep in mind that any spread which involves at least two different legs, and a non-symmetrical number of contracts traded on each leg, technically falls under the umbrella of a “ratio spread.”

One important distinction with front spreads is that they possess clear directional bias—meaning they generally perform better when the underlying stock moves in one direction, as opposed to the other.

On top of the directional bias in front spreads, there’s also a volatility component to such positions. This is reflected by the fact that one unit of volatility has been purchased, while two units have been sold—assuming it’s a 1-by-2 ratio spread.

That means investors and traders seeking to express a market opinion on both direction and volatility might be drawn to ratio spreads such as these.

And just as the structure is reversed, so too are the risk exposures, as one can see in the summarized positional risk profiles below.

Ratio spreads can be used to express a diverse range of market outlooks. At the same time, these spreads do fall on the more advanced side of the options trading spectrum, due to their associated undefined risk nature.

It’s recommended that investors and traders familiarize themselves with the risk profiles of ratio spreads before deploying them “live” in the market. It can also be prudent to mock trade (i.e. paper trade) a new options approach to learn how it behaves. 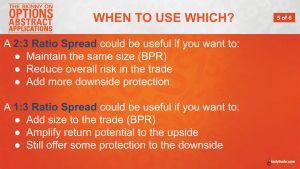 To learn more about unbalanced ratio spreads, readers can review a new installment of The Skinny on Options on the tastytrade network. For more context on defined risk versus undefined risk, this previous installment of From Theory To Practice is also recommended.