In the past few months, “YOLO” has become a common refrain among many new investors. “You only live once” trades typically involve an investor going all-in on one stock and hoping for the best. But that’s not really trading or investing—it’s more like gambling. It can prove profitable at times, and it’s fun if it’s working, but it’s not sustainable. It is a strategy designed to fail.

Instead, traders can—and should—diversify their portfolios, which enables them to capitalize on profitable opportunities while simultaneously reducing the risk of picking the wrong stock. The recent explosion of special-purpose acquisition companies, or SPACs, provides an excellent case study on how to diversify.

Some of the SPACs launched on public markets in recent months have skyrocketed while others have fallen flat. So, rather than trying to pick the SPAC, investors can instead invest in several, diversify their exposure and increase their chances of buying an outperformer.

While financial advisors use the term “diversification” to explain why a portfolio needs a certain stock-bond allocation, it’s also a viable strategy for anyone looking to catch the next big move.

Consider an investor looking for SPAC exposure back in January and trying to decide between two of the most liquid: Churchill Capital Corp. (CCIV) and Pershing Square Tontine Holdings (PSTH). Armed with today’s knowledge, the investor would have purchased Churchill and enjoyed a return of 147% by mid-March. Meanwhile, Pershing Square declined 5%.

But without clairvoyance, it would have been impossible to determine which was worth buying. Let’s consider how the investment might have turned out if the trader decided not to make a choice and simply purchased both.

Doing so would have improved the chance of picking the winning stock and collecting a positive return. If the investor had used 50% of his funds to purchase Churchill and 50% to buy Pershing Square, the portfolio would have yielded 69% over the previously described period. That’s not as great as 147%, but it’s certainly better than -5%.

That’s just one example of how diversifying can help create a more balanced portfolio. If the investor was more bullish on one stock over the other, he could have fine-tuned the exposure. The table shows the performance of various portfolio allocations, any of which would have yielded a higher return than simply buying Pershing Square.

So instead of investing everything in a single strategy, consider diversifying with multiple holdings to increase the likelihood of picking a winning stock and spreading the risk. 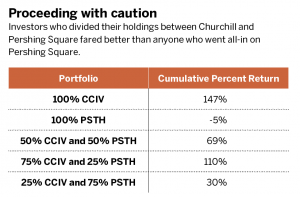