It will be important to pay attention to whether this relatively minor correction will develop into something more serious. Dating back to 1946, there have only been 12 trading years in which the major market indices dropped by more than 20%.

Down moves of 20% or more are typically referred to as bear markets. The last 12 bear markets are listed below, as well as the year-to-date returns in the S&P 500 in 2022:

With the S&P 500 currently hovering around an important level of support, the next chapter of the 2022 stock market story will likely be written in the near future. Either the market bounces back off that level of support, or it finally crashes through.

Previous research conducted by tastytrade has shown that when the S&P 500 drops by more than 1% during three consecutive trading days, the third day of losses tends to be the most severe. 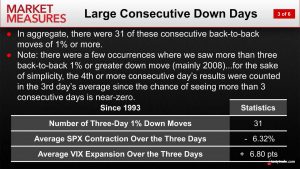 The above pattern isn’t applicable to the most recent three trading days in 2022 because the S&P 500 dropped during only two of the last three trading days, as opposed to three days straight. But considering current sentiment, a three day streak could materialize in the near future.

It’s also important to highlight that down days in the stock market can be exacerbated by the knee-jerk reactions of market participants, as outlined on a recent episode of The Skinny on Options: Abstract Applications.

On this show, the hosts outline how fear in the marketplace can exacerbate selloffs, as market participants stampede to purchase protection (i.e. puts), and in turn force counterparties of those transactions to sell (or short) additional shares of stock.

The first part of that equation isn’t difficult to understand. When prices explode downward, fear overtakes some market participants, and they express that fear by purchasing puts. But those put purchases create a domino effect, because market makers on the other side of those transactions must risk-manage accordingly, as their inventory of short puts grows larger.

So if a market maker sells 1 put contract, he or she will typically sell 20-80 shares of stock (per contract) to “delta hedge” the position. Collectively, this process is known as “delta neutral trading.”

Delta neutral hedging refers to a trading approach/strategy where the delta exposure (directional bias) of an options position is reduced through an offsetting position in the underlying security. A delta neutral trader seeks to isolate the theoretical edge from volatility (i.e. mean reversion), while minimizing the directional bias of the portfolio.

Considering those mechanics, it’s easier to understand why a down move in the markets can be exacerbated by “fear.” As more puts are purchased, more stock is being sold (or shorted) to account for growing risks to the downside. 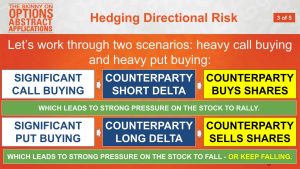 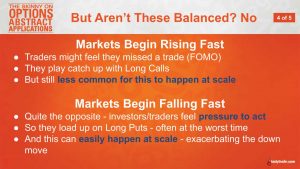 One also has to keep in mind that liquidity in the markets also can dry up during explosive down moves. That situation can also serve to push prices lower, as market participants are forced to lower their offers in order to find the required levels of liquidity.

In the reverse scenario, when markets are rallying, liquidity usually remains robust, which is why upward moves in the market tend to be less “explosive,” as compared to down moves.

To learn more about the mechanics of explosive down moves in the stock market, readers are encouraged to review a recent installment of The Skinny on Options: Abstract Applications on the tastytrade financial network. For more information on delta neutral hedging, this episode of Options Jive is also recommended.

For updates on everything moving the markets, readers are encouraged to tune into TASTYTRADE LIVE, weekdays from 7 a.m. to 4 p.m. CDT.