With another wave of the COVID-19 pandemic currently threatening the nascent global economic recovery, it’s worth revisiting valuations in the stock market against the backdrop of another potential contraction in economic activity.

One of the best-known metrics for assessing valuations is a ratio like Price/Earnings (aka P/E Ratio), and in particular the P/E for the entirety of the S&P 500.

The P/E Ratio is calculated by taking the average stock price of large-cap stocks in the S&P 500 Index and dividing that collective price by the respective mean earnings of those companies. The quotient of that calculation typically equates to what many refer to as the P/E of the “market.”

This figure is important because it can be tracked over time, and since the early 1900s, the mean P/E for the market has hovered right around 16.

When the market’s P/E rises above 16—especially to an extreme degree—some market pundits start to worry about “overvaluations.” The same can be said when the market’s P/E drops below 17, although in that case the concern is that stocks might be getting undervalued. 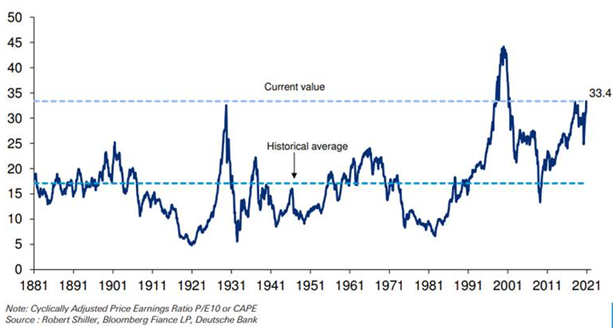 One can’t forget that the impairment of earnings during the pandemic is an important reason why the ratio might be so high at this time. With earnings depressed, that means the denominator of the P/E equation is ultimately lower—in turn pushing the final quotient higher.

In other words, the market may be allowing the P/E Ratio to range well above its historical average because investors and traders expect corporate earnings to catch up and slowly push that P/E back toward its historical mean.

Based on current earnings projections, that certainly appears to be a likely, although by no means guaranteed, scenario. The P/E Ratio of the S&P 500 has dropped from the nosebleed levels observed earlier this year when it was trading above 40 in April.

Along those lines, corporate earnings do appear to have rebounded somewhat from the levels observed during the height of the pandemic. As of late July, roughly 88% of companies in the S&P 500 had reported higher than expected earnings “surprises.” Moreover, so far in Q2, the blended earnings growth rate for the S&P 500 has been an impressive 85.1%.

The recovery in earnings during Q2 is likely why the P/E ratio has declined slightly, without a noticeable correction in the overall stock market.

However, other market indicators also suggest that the U.S. stock market may be running a little hot at this time. The so-called “Buffett Indicator”—named for the iconic investor Warren Buffett—is currently redlining at 204%.

Mr. Buffett has previously stated his belief that the percentage of total market capitalization relative to U.S. GDP is “probably the best single measure of where valuations stand at any given moment.” One can see in the chart below that previous peaks in the Buffett Indicator have ultimately led to noticeable valleys. 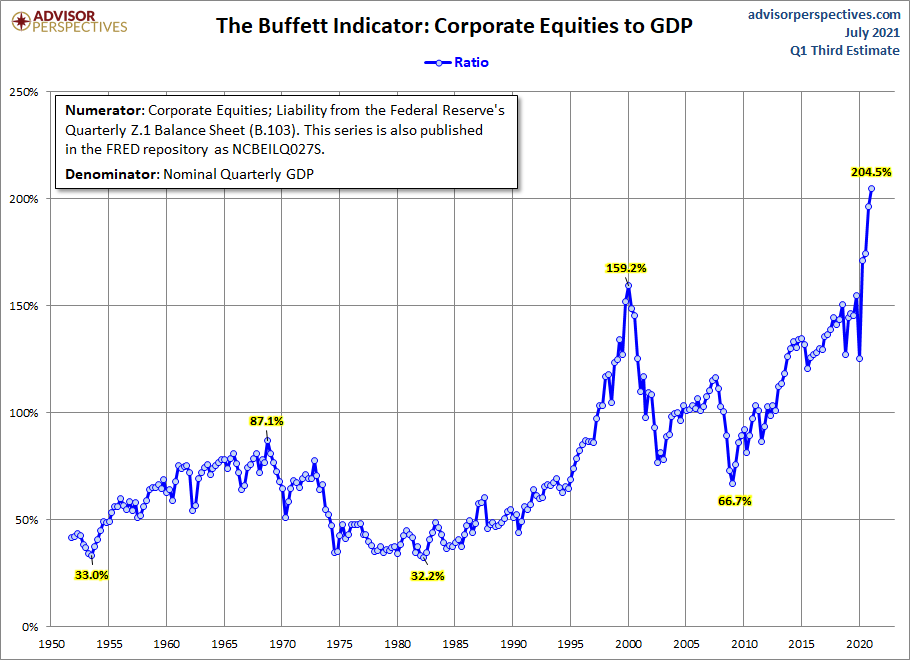 It’s virtually assured that a chart like the one pictured above will reverse course at some point in time—but to what degree and when—are much harder questions to answer.

Readers seeking to learn more about the P/E Ratio and its role in assessing overall market valuation may want to review this vintage installment of Market Measures on the tastytrade financial network.