Safe havens are traditionally defined as niches of the financial markets that retain, or even gain value, during periods of heightened volatility. Market participants typically seek out safe havens in order to help limit losses—or make positive returns—amidst downturns in the stock market.

During the last couple of financial crises (the great recession and the COVID-19 pandemic), global investors and traders fled to government bonds as a place to park their cash. Precious metals such as gold, silver and platinum have also traditionally been used as safe havens, although arguably less so in recent years.

Of course, the definition of a “safe haven” truly resides in the eyes of the beholder.

During periods of heightened stock market volatility, some investors and traders may simply elect to hold cash—cash that can be used as an emergency reserve for personal expenses, or for capitalizing upon new investment/trading positions amidst a correction.

That scenario would defeat the entire purpose of a safe haven.

Considering the rising influence of cryptocurrencies in the global financial markets, it’s worth considering whether this emerging asset class technically qualifies as a safe haven. Recent trends suggest that isn’t the case.

When cryptocurrencies first emerged on the scene, they exhibited very little correlation with the broad stock market indices. For example, a previous market study conducted by the tastytrade financial network indicated that Bitcoin’s correlation with the S&P 500 was about 0.22, as illustrated in the graphic below. 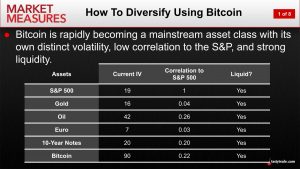 As a reminder, correlation—as it relates to the financial markets—refers to the degree to which securities/assets move in relation to each other.

Market correlations are typically expressed as a number between -1 and +1.

According to this scale, the positive correlation between Bitcoin and the S&P 500 would be considered fairly weak at 0.22. That means on some occasions the price of Bitcoin moves in tandem with the S&P 500, but on the majority of occasions, it does not.

However, one must keep in mind that market correlations can shift over time, and can also shift with the investment environment.

Generally speaking, correlations in the market tend to increase during periods of heightened volatility because investors and traders become less focused on nuances in the market, and instead often elect to “sell, sell, sell” without prejudice. In complacent markets, correlations tend to decrease as investors and traders chase a diverse group of investing/trading ideas and strategies across the financial spectrum.

During the most recent correction in the stock market, in late November of 2021, the cryptocurrency sector exhibited a stronger correlation to the stock market than many would have likely expected, prior to the selloff. 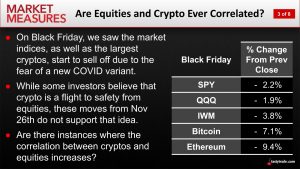 In the meantime, investors and traders may want to tread cautiously when it comes to treating the cryptocurrency sector as a so-called “safe haven.”

Of course, the aforementioned data doesn’t speak to the broader investment case for the cryptocurrency sector, which will vary by investor—according to his or her market outlook and appetite for risk.

To learn more about the correlations between the crypto sector and the stock market, readers are encouraged to review this new installment of Market Measures on the tastytrade financial network.

For timely updates on everything moving the financial markets, readers can also tune into TASTYTRADE LIVE—weekdays from 7 a.m. to 4 p.m. CST—at their convenience.