However, most of the positive momentum in the S&P 500 occurred during the first four months of the year. Since the start of May, the S&P 500 is up only about 1%—indicating that the last six weeks of trading have been characterized by mostly a sideways market.

Given that data, some market participants might assume that the S&P 500 only lost steam due to the onset of the “summer doldrums.” And based on new research conducted by tastytrade, there may be some truth to that.

Using historical market data in the SPDR S&P 500 ETF (SPY) from 1993 to 2020, a tastytrade market study revealed that the months of May, June and December tend to be the least volatile on the calendar, on average. And looking at the other end of the volatility spectrum, September and October tend to be the most volatile on the calendar, as highlighted below. 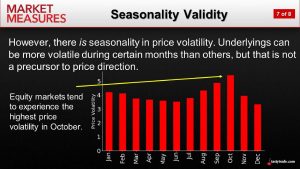 The above research, which was presented in a new episode of Market Measures, helps explain why May and June might feel at times like the “summer doldrums.” The fact that many investors and traders take extended vacations during this period of the year may be a partial reason for this phenomenon.

Recent trading activity in the CBOE Volatility Index (VIX) appears to confirm this historical trend. As of mid-June, the VIX is trading under 16, which is 40% lower than where it started this year.

And while the seasonality of volatility is important to be aware of, investors and traders should also keep in mind that there’s no clear evidence that a given month on the calendar has produced more attractive historical returns as compared to the other eleven months of the year.

This data was also presented on Market Measures, and demonstrates that in terms of predicting returns, positive or negative, all calendar months are apparently created equal. One key to this portion of the study was that tastytrade analyzed not only the actual historical market returns, but also factored-in the standard deviation of those returns.

As shown in the graphic below, there was no statistical significance revealed in the data (i.e. no discernible historical trend), indicating that the calendar is fairly unbiased when it comes to returns. 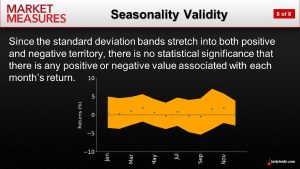 The above actually corroborates previous tastytrade research which demonstrated that trading volumes aren’t useful predictors of price direction, either.

In order to study the relationship between volume and price direction, tastytrade examined the trading histories of four well-known equities—SPDR S&P 500 ETF (SPY), Apple (AAPL), Tesla (TSLA), and Netflix (NFLX). This data was back-tested to evaluate whether there was a discernible relationship demonstrated between volume indicators and the ultimate direction of the underlyings.

The findings from this effort revealed virtually no evidence of any statistical significance existing between the daily change in volume and price direction, basically a zero correlation.

Moreover, isolating historical trading data in those four symbols to exclusively include only days when there were spikes in volume revealed the same thing—virtually zero correlation.

In sum, the above research shows that while investors and traders may not be able to predict price direction using volume indicators, or using the month on the calendar, there is empirical evidence that indicates certain periods of the year do tend to be more volatile than others.

To learn more about the seasonality of volatility, readers can review the full episode of Market Measures focusing on this subject when timing allows. More information on the lack of a discernible correlation between volume and price direction is also available via this previous episode of Tasty Extras.