It’s not an easy time to be a central banker.

These days, central bankers are not only dealing with a fragile world economy, but also rampant inflation, an impaired global supply chain, a global health pandemic and the outbreak of war in Eastern Europe.

Talk about a tough day at the office—imagine trying to formulate economic policy amidst that level of uncertainty.

But despite all the chaos, central bankers in the United States appear to have agreed on a course of action, at least in the near term.

On March 16, the U.S. Federal Reserve announced that it was raising benchmark interest rates in the U.S. for the first time since 2018. That action means the federal funds rate has now increased to 0.25%, from 0.00%.

Superficially, that may not seem like a tectonic event for the financial markets. But the Federal Reserve has indicated that it could raise rates as many as five to six more times this year.

That aggressive stance is what’s really making headlines, although expectations are one thing, while reality could end up being something much different.

Whether the Fed is able to achieve its goal of significantly raising rates this year—and beyond—is highly debatable. Especially because some projections now suggest that an economic recession might lie on the horizon.

That means the Fed will have to choose its next steps carefully.

It seems like a long time ago, but it was only about 18 months ago that the Federal Reserve unveiled a subtle, yet important, policy change.

Back in August of 2020, the Fed announced it was loosening its control over inflation in favor of maximizing employment. Considering where inflation is these days, that now seems like a fairly important moment in history.

That change affected what is commonly referred to as the Fed’s “dual mandate”—the twin responsibilities of the Federal Reserve to maintain low inflation and low unemployment in the economy.

In the fall of 2020, the Fed decided to change the way it calculates inflation.

As of Sept. 1, 2020 the Fed started to average their inflation calculations over a longer period of time. That effectively meant that short-term spikes in inflation wouldn’t necessarily be met with associated increases in benchmark interest rates.

Ironically, one of the big risks to that approach was that the economy could overheat and ultimately catalyze undesired levels of inflation. Notably, the U.S. Department of Labor announced in March of this year that inflation was running at a 40-year high—jumping 7.9% over the previous 12 months.

Those record rates of inflation make one wonder whether the change by the Fed back in 2020 might have been ill-advised.

Certainly, former Treasury Secretary Lawrence Summers appears to feel that the response by the Federal Reserve has been too little too late.

In February, Summers told The Harvard Gazette, “I have been critical of the Fed for the better part of a year on its failure to recognize that inflation became, as of last spring, the most serious short-run threat facing the American economy.”

What It All Means Right Now

Back in 2020, the Fed was no doubt trying to act in the best interests of the economy.

The intent of the 2020 policy change was to ensure that a post-pandemic economic recovery wouldn’t be snuffed out early by higher interest rates. Unfortunately, global supply chain problems associated with the pandemic caused unusual upward pressure on the prices.

That situation—combined with inaction by the Fed—is why inflation hit multi-decade highs in 2021 and early 2022. The concerning problem at this time is that some data now suggests that a recession could materialize anyway.

Energy prices—specifically crude oil—have spiked dramatically in 2022. And historical data shows that price spikes like the one observed in recent months typically increase the likelihood of a recession.

Moreover, the yield curve has also been flattening—another trend that has historically preceded recessions. The yield curve essentially plots the yields on all Treasury maturities—debt sold by the federal government—ranging from one-month bills to 30-year bonds, as illustrated below. 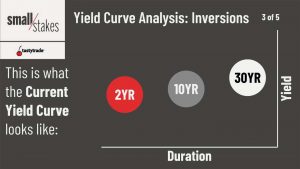 Trading Yields and the U.S. Dollar

Historically, a couple of the best inflation trades have revolved around yields and the U.S. dollar.

Yields are basically the effective interest rates that the U.S. government pays to borrow money for different lengths of time. And the 10-year U.S. Treasury yield is generally viewed as one of the most important barometers of the U.S. economy.

Case in point, the U.S. 10-year Treasury yield dropped to its lowest level in history during March of 2020—0.54%—on fears that the COVID-19 pandemic would ravage the global economy. Since that time, the 10-year yield has rallied back to 2.31%, where it sits today.

Rate hikes by the Fed are historically correlated with rising yields, as both are generally indicative of a strengthening in the underlying economy.

That means that if the Fed does in fact raise rates further in 2022, U.S. Treasury yields should also move higher. While elementary in nature, this suggests a long yields trade would be profitable in the event that further rate hikes do materialize.

Alternatively, rising interest rates also tend to correlate with a strengthening in the U.S. dollar.

This is due to the fact that higher interest rates are typically more attractive to foreign capital—meaning demand for the dollar tends to increase as global investors shed their own currencies in favor of the dollar.

Likewise, the U.S. dollar has also appreciated in the last six months. Since late September of 2021, the U.S. Dollar Index (DXY) has risen from roughly 93 to 98. The DXY is currently trading near its 52-week high.

The big question is of course what happens from here.

If the underlying economy remains strong, it’s virtually assured that the Federal Reserve will continue to raise rates in 2022—likely driving yields and the dollar higher.

However, if the economy starts to contract in any meaningful way, then the Fed will likely have to suspend its current plan for more rate hikes.

One of the nightmare scenarios is of course if a recession were to materialize before the Fed has the opportunity to raise rates.

Historically, one of the Fed’s more powerful tools for assisting the economy during difficult periods is to cut benchmark interest rates. But if rates are already close to zero, then that would seemingly make the Fed’s job a lot harder.