With a new NASA rover currently patrolling Mars, interest in space exploration has increased substantially, and this time around, exploration on Mars won’t be limited to only surface-based investigations.

On April 4, the Perseverance rover deployed a second craft—the Ingenuity helicopter. Ingenuity was tucked inside the belly of Perseverance during their interstellar trip, but will now be free to roam the friendly martian skies.

With Mars hype crescendoing, many market participants are likely wondering how to get active in space exploration—from a trading and investment standpoint.

Accessing space-related companies isn’t necessarily easy because they are usually part of the government (i.e. the Jet Propulsion Laboratory), private entities (i.e. SpaceX), or a combination of both.

But looking beyond the highest profile names, there are ways that market participants can access the space exploration sector—namely through single stocks and exchange-traded funds (ETFs) that are directly, or indirectly, linked to the exploration of the cosmos. 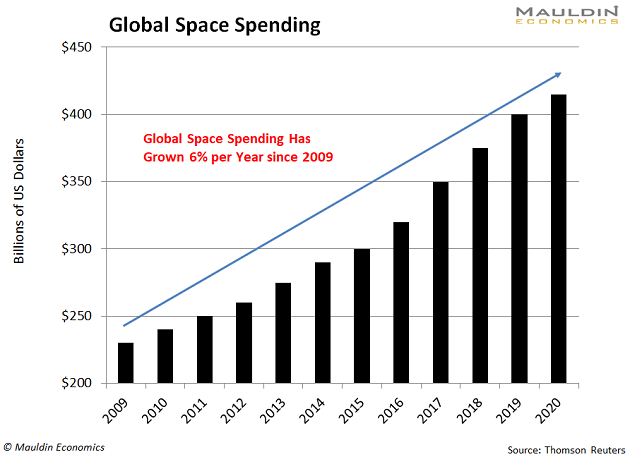 Prior to 2021, there were two well-known ETFs geared toward space exploration, including the SPDR S&P Kensho Final Frontiers ETF (ROKT) and the Procure Space ETF (UFO).

ROKT markets itself as a product for investors and traders that want exposure to companies whose products and services are driving innovations behind the exploration of deep space and the deep sea. In practice, that means this ETF is heavily biased toward the aerospace and defense sectors, including companies like Aerojet Rocketdyne Holdings (AJRD), Boeing (BA) and Northrop Grumman (NOC).

UFO, on the other hand, uses a different set of criteria to manage its holdings. This ETF only invests in companies that possess “material exposure” to space-related industries.

To ensure its goal is met, UFO filters for companies that can generate at least 20% of their total revenues from space-related products and services—or at minimum $500 million from such activities.

In practice, that equates to an ETF skewed toward the following subsectors: Satellite telecommunications, space-based imagery, rocket/satellite manufacturing and other space-related technologies. Notably, approximately 40% of the fund’s assets are wrapped up in communication services stocks like Eutelsat (French), Garmin (USA, GRMN) and Sky Perfect JSAT Group (Japan).

The manager of ARKX, ARK Investment Management, is known for “thematic investing in disruptive innovation technologies.” ARK made a name for itself last year when a few of the company’s technology-focused funds produced some of the highest returns in the ETF universe (ARKG, ARKK, ARKW). 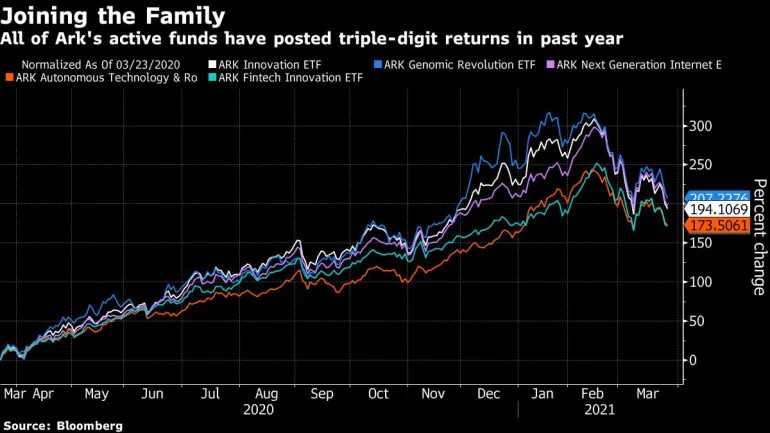 The launch of ARKX was certainly well-timed, given the build-up in excitement over the arrival of Perseverance on Mars. Curiously, however, holdings in the fund do not outwardly appear to match its space-themed vision.

For example, included in ARKX are Alibaba (BABA), Amazon (AMZN), JD.com (JD) and Meituan (MPNGF)—all of which are Earth-based e-commerce titans. Additionally, there’s the head-scratching inclusion of Netflix (NFLX) and Tencent (TCEHY), two companies that are primarily focused on streaming content and mobile entertainment (i.e. movies and games).

The somewhat puzzling inclusion of non-space-related companies in ARKX did raise some red flags amongst the broader investing community. Longtime market pundit Jim Cramer said of the ARKX launch, “Maybe … don’t launch a space ETF if you have to pad it out with Netflix and Deere.”

The market appeared to agree with these cautionary sentiments, at least on the new fund’s first day of trading. While volume was robust, ARKX ultimately dropped about 5% on its debut, and currently trades for about $21/share.

Investors and traders keen to uncover other diamonds in the celestial rough may want to further investigate some other new listings in the sector. It should be noted that special-purpose acquisition companies (SPACs) have been an especially popular method of listing space-related names, including these recent/upcoming offerings:

To follow everything moving the markets, readers can tune into TASTYTRADE LIVE, weekdays from 7 a.m. to 4 p.m. CST.

Subscribe to receive 10-issues of Luckbox in print! See SUBSCRIBE or UPGRADE TO PRINT (upper right) for more info.