Bearish sentiment has taken hold in the financial markets as of late, and the precious metals market has been no exception.

In absolute terms, gold prices have clearly been weak in 2022.

Interestingly, however, according to another popular metric, gold’s value has actually strengthened as of late—at least in silver terms. That’s according to the Gold/Silver ratio, which is traditionally followed closely by investors and traders in the precious metals space.

Silver’s decline has been more severe than gold in 2022, which has in turn boosted the Gold/Silver ratio. Silver is down roughly 30% from its February peak, and is currently trading $18.43/ounce.

Traditionally, pairs traders sell gold and purchase silver when the Gold/Silver ratio reaches the upper bounds of its historical range. This position theoretically benefits from a drop in the ratio—requiring gold to go lower, silver to move higher, or a combination of both.

After notching an all-time high, the Gold/Silver ratio tailed back toward its historical mean in 2020. This occurred because silver prices finally caught up to gold, rallying during July and August of 2020.

That set of events ultimately pushed the Gold/Silver ratio back down to about 70.

Mean reversion trades are possible in the gold and silver trade because the two share such a strong, positive historical correlation—about 0.89 over the long term.

When a breakdown occurs in the trading relationship between the two metals, investors and traders often deploy pairs trades that hinge on that relationship returning to normal. Such breakdowns can be observed through extremes in the Gold/Silver ratio, which is why many precious metals traders closely monitor this metric.

In either case, a profitable result relies on the ratio reverting toward its mean. From March of 2020 to January of 2021, the Gold/Silver ratio dropped from a record high of nearly 120 all the way back down to about 64.

The big question going forward is whether the ratio will inflate back toward those 2020 extremes, or back down from here.

Strength in the U.S. dollar during 2022 has undoubtedly weighed the precious metals sector in 2022. When the value of the dollar increases relative to other currencies worldwide, precious metals tend to fall in U.S. dollar terms. But that doesn’t explain why silver prices have been dropping at a faster rate than gold prices. 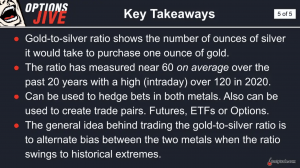 To learn more about trading the Gold/Silver ratio, check out this episode of Options Jive on the tastytrade financial network. For daily updates on everything moving the markets, tune into TASTYTRADE LIVE—weekdays from 7 a.m. to 4 p.m. CDT.