The 2022 trading year has been filled with some strange market activity, but one of the more notable occurrences took place back on March 15.

On that day, the iPath Series B S&P 500 VIX Short-Term Futures ETN (VXX) shot up 30%. In its own right, a large move in a volatility product like VXX isn’t that unusual.

However, on that same day, the CBOE Volatility Index (VIX) was actually trading lower. It’s that dislocation—between the VIX and VXX—that made March 15 especially notable.

As it turned out, this came about because of an announcement made by Barclays—the issuer of VXX—on March 14. That day, Barclays announced it was indefinitely suspending share sales in VXX, and that it had halted the creation of new shares in the well-known exchange-traded note (ETN).

It was those developments that abruptly disrupted the normal operation of the VXX, and in turn contributed to the dislocation between the VIX and VXX back, as illustrated below.

Under normal trading conditions, the VXX should carefully track the VIX, because the VXX is comprised of short-term VIX futures. And normally, if the price of the VXX starts to stray too far from VIX, the market steps in to quickly bring them back in line.

However, without the creation of new units, it becomes nearly impossible for the market to remain efficient, as market actors like banks, hedge funds and proprietary trading firms can’t access the liquidity they need to keep the relationship between VIX and VXX “true.”

In such an environment, an ETN like VXX begins to trade based on supply and demand, as opposed to its indicative value.

Indicative value is the price at which the VXX would be expected to trade based on the value of its underlying constituents. So absent the creation of new units, VXX was officially untethered to VIX on March 14, which is why it was able to rally by 30% on March 15 without a reciprocal move in the VIX.

Having noticed that VXX was in a compromised position, it appears that a group of market participants stepped in to try and catalyze a short-squeeze in the product—similar to what’s been observed previously in so-called meme stocks like GameStop (GME) and AMC Entertainment (AMC).

While this group was briefly rewarded for their efforts on March 15, VXX did ultimately retrace that day, and has traded mostly in line with VIX in the interim.

Additional details have also emerged which provide important context on the situation.

What’s become clear is that the VXX issuer (Barclays) was forced into these actions because it lacked the issuance capacity to create additional shares. In fact, it was also discovered that share sales in several Barclays structured products (such as VXX) had already exceeded the amount permissioned well before March 14.

As a result of those errors, Barclays was forced to buy back $17.6 billion worth of securities that it sold on error (by exceeding the amount permissioned). Those buybacks occurred on Aug. 1, and cost the bank roughly $631 million in losses. 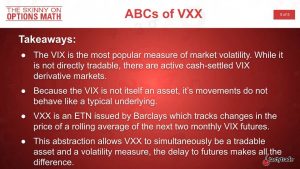 In recent weeks, Barclays has restarted new shares sales in many of the impacted products. Interestingly, however, VXX is not one of them. That means at this time, VXX and VIX remain technically untethered. That said, the discrepancy between their respective valuations is more nominal than it was back on March 15.

Today, VXX is trading at a slight premium to VIX—the former is currently trading 21.18, while the latter is trading for 19.82. However, market participants should be aware that in the event of a sudden spike in market volatility, VXX could still rally at a faster pace than VIX. It’s possible such a development could also contribute to another dramatic short squeeze in VXX.

Barclays has specifically warned of the potential for unusual trading activity in VXX, as well. Specifically, the concern is when there are significant premiums or discounts. Because when new share sales are resumed, it’s almost certain that those premiums/discounts will be quickly eliminated

For example, if VXX was trading $30/share, while VIX was trading 21, one would expect the VXX to get pushed down to roughly $21/share, whenever new share sales resume.

Barclays alluded to this risk in a recent statement stating, “In particular, if an investor paid a premium purchase price over the indicative value of the resumed ETNs, it could lead to significant losses in the event an investor sells resumed ETNs at a time when such premium is no longer present in the marketplace or if Barclays redeems the resumed ETNs at its discretion.”

Barclays has not yet announced a specific date for any forthcoming changes to the current VXX situation, saying only that the bank will resume normal operations for still-suspended ETNs once the rescission offer has expired, and will announce the relevant dates for actions affecting those products at some point in the future.

For the time being, that means market participants in the volatility space may want to tread cautiously when it comes to VXX, and other impacted products.