Regardless of one’s core approach in the markets, most investors and traders at some point or other “trade the news.”

Trading the news refers to a trading/investing approach that attempts to capitalize on planned news events or, by capitalizing upon sudden, unexpected news developments.

For example, earnings-focused positions fall under the category of “trading the news,” as do biotech positions that hinge on planned/unplanned announcements by the Food and Drug Administration (FDA).

One of the keys to successfully trading the news is market awareness, because this approach can’t be seamlessly executed without market context, and the ability to monitor and act upon news developments in rapid fashion.

However, there’s more to trading the news than just market awareness, because often times news developments catalyze counter-intuitive moves in the market. 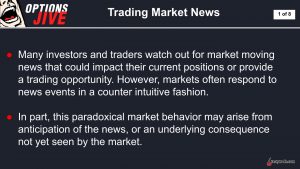 In that regard, “trading the news” is part science (market awareness) and part art (understanding how a given news development will impact a security, or multiple securities). Market participants new to this approach are therefore wise to “mock trade” (i.e. paper trade) a trading the news position before entering into any live positions.

This is especially important when trading the news, because not everyone has the innate ability to consistently interpret the impact of news events correctly. Certainly, no one is ever right 100% of the time, but one must establish that he or she can at least be successful in the majority of instances.

Looking at a recent example, many market participants likely guessed correctly that the onset of a global health pandemic would push global stock markets into corrective territory. However, there were far fewer investors and traders that likely would have bet on such a sharp reversal.

Earnings events, like any news event, are likewise unpredictable. For example, a company’s earnings report might beat consensus expectations, but the associated stock can still move lower in the wake of the announcement.

The chart below highlights consensus earnings expectations for Apple (AAPL) during five consecutive quarters spanning 2020-2021. Alongside hose consensus figures are the actual reported earnings, and the reaction of the stock during the trading session that immediately followed the earnings release.

Apple stock at times has moved in counter-intuitive fashion after an earnings beat or miss. The earnings released in Q2 2020 and Q4 2020 are of particular interest, because they seem to fit the “sell the news” maxim.

Sell the news refers to a situation in which seemingly positive news is announced, which then results in a selloff of the underlying security (or group of securities). Apple earnings were better than expected in Q2 and Q4 of 2020, but in each case, AAPL stock proceeded to move lower.

Selling the news is often paired strategically with “buying the rumor,” as a two-pronged trading approach. This typically involves building a bullish position that benefits from positive market sentiment ahead of an event, and then selling out of the position after the event passes.

“Fading” is another term often used in conjunction with selling the news, as some investors and traders choose to take a contrarian position when interest in a given underlying (or market story) wanes. The recent correction in Bitcoin after the El Salvador news qualifies as a good example of fading, or selling the news.

In recent weeks, Bitcoin’s value had steadily appreciated on optimism that the country of El Salvador would officially adopt the cryptocurrency as legal tender. However, those gains were wiped out ($52K/coin down to $42/coin) in a single day after the actual news event came and passed.

Of course, the selloff in cryptocurrencies wasn’t limited to only Bitcoin, as the entire sector moved significantly lower in the wake of El Salvador’s official adoption of Bitcoin as legal tender.

More information on the recent fading of the cryptocurrency sector in the wake of the El Salvador news is available on this episode of Jones and Grace.

Readers seeking to learn more about “trading the news” are also encouraged to review this previous installment of Options Jive on the tastytrade financial network. For updates on everything moving the markets, TASTYTRADE LIVE—weekdays from 7 a.m. to 4 p.m. CST—is also recommended.