When market sentiment moves in one direction, as it has recently in the cryptocurrency sector, contrarian traders and investors typically move in the other.

And looking at the historical price charts of cryptocurrencies such as Bitcoin and Ethereum, the contrarian approach has worked rather well in the past. Of course, that’s no guarantee that approach will work in the future.

That’s because contrarian trading isn’t as easy as simply adopting an unpopular market opinion. Contrarians also need to be right more often than they are wrong, or at least be fortunate enough to trade their winning positions bigger than their losing positions.

From a strategic standpoint, contrarians often enter positions when they feel that sentiment has gotten too negative or too positive—essentially when a given underlying hits an “extreme.”

That means that contrarians are drawn to financial headlines that involve an abundance of optimism, or an abundance of pessimism. And as of June 2021, the cryptocurrency sector appears to have migrated into the latter category.

Since reaching an all-time high above $65,000/coin in April 2021, Bitcoin prices have steadily declined throughout early summer. The price now stands at about $31,000/coin, which represents a decline of over 50% from the all-time high.

Looking at trading behavior in Bitcoin over the last month or so, a significant level of resistance appears to have materialized at $40,000/coin, as the world’s best-known cryptocurrency has continuously struggled to trade above that level. And more recently, it appears that Bitcoin has even fallen through a key level of support at $33,000, as illustrated below. 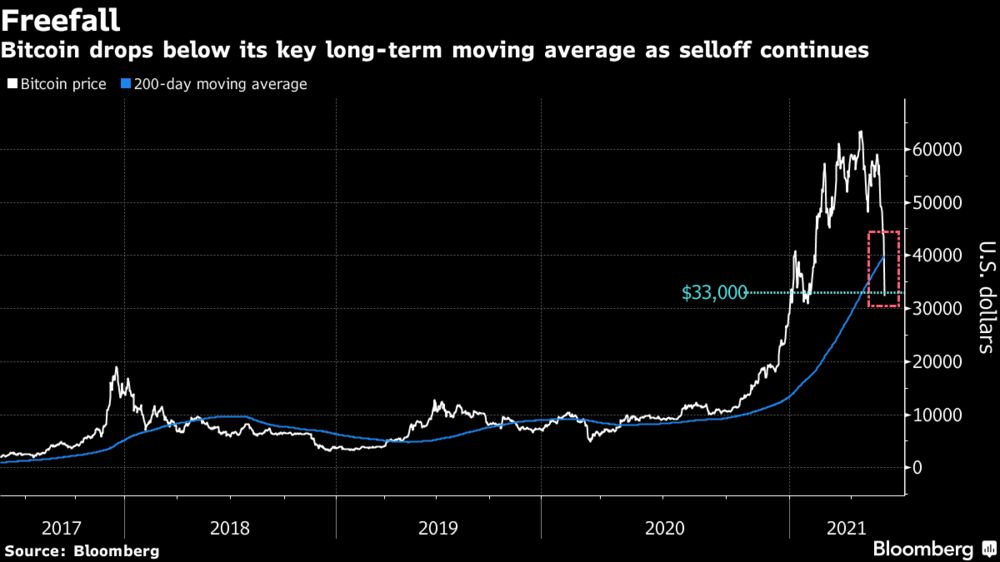 The second-largest cryptocurrency by market capitalization, Ethereum, has experienced a similar decline in recent weeks. Since peaking above $4,100/coin in early May, Ethereum prices have now dropped well below $2,000/coin. As of late June, Ethereum is trading around $1,700/coin.

Dogecoin, which caught fire earlier in 2021, has experienced a similar reversal. After briefly climbing above $0.70/coin in early May, Dogecoin has plummeted all the way back down to $0.23/coin—a decline of nearly 70% in roughly seven weeks.

As a whole, the combined market capitalization of the entire cryptocurrency sector lost more than a trillion dollars in value during the May correction. And bitcoin’s market cap, which on its own stood above $1.2 trillion in spring, has now fallen to around $600 billion.

Considering the aforementioned market action, it’s easy to see how the cryptocurrency sector might be described as awash in negative sentiment. And that new status has undoubtedly attracted a fresh group of contrarian investors and traders.

Naturally, the big question now is when (or if) the tide of negative sentiment will shift in the other direction. A key to successful contrarian trading is an ability to recognize when a trend has turned, or even better, when it’s poised to turn.

To identify such opportunities, contrarians often rely on technical trading indicators, fundamental trading indicators and news developments—or a mix of all three. The trick, however, is designing a contrarian approach that produces consistent, repeatable (not to mention profitable) results. 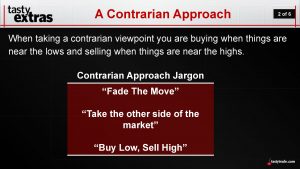 The cryptocurrency sector has also theoretically been kind to contrarians in the past.

After cratering during 2018 and early 2019, Bitcoin prices rallied all the way back from around $4,000/coin in March of 2019 to their 2021 heights above $65,000/coin. But of course, there’s no guarantee that prices will recover to those levels anytime soon—or ever again, for that matter.

Moreover, there’s no telling how much downside is left in the current bear market. At this time, there’s no universally agreed-upon methodology for valuing cryptocurrencies, which is a big reason the cryptocurrency market is so volatile in the first place.

One certainty, however, is that a slew of market participants will undoubtedly be playing both sides of the cryptocurrency sector in the coming weeks and months. Some piling on the current downward trend, and others trying to capitalize on a potential reversal.

A good portion of investors and traders in the latter group will undoubtedly be traditional contrarians.

To learn more about the contrarian trading philosophy, readers may want to review a previous installment of Tasty Bites on the tastytrade financial network.