The strong rally in global  indices has extended from 2020 into 2021, but a previously hot corner of the market has now slumped into bear territory—a development that investors and traders may want to monitor closely in the coming weeks.

The downtrodden group includes mostly US-listed Chinese companies, and particularly those in the Chinese technology sector.

This curious market divergence is illustrated by the fact that the Nasdaq 100 is trading only about 6% below its all-time high, while the KraneShares CSI China Internet ETF (KWEB) has cratered 26% since early February.

The top holdings in KWEB include some of the best-known companies in the Chinese technology sector, such as Alibaba (BABA), Baidu (BIDU), BIlibili (BILI), Meituan (MPNGF), Pinduoduo (PDD) and Tencent (TCEHY).

The reversal in KWEB is particularly notable because it had been one of the market’s leaders during the massive global equity rebound that’s been playing out since last spring.

And while other US-listed Chinese shares have also slumped, the most dramatic moves have so far been limited to the technology sector. To wit, the more diversified iShares China Large-Cap ETF (FXI) is down roughly 13% since mid-February—considerably less than the decline in KWEB.

The answer can be found in three primary narratives—the implosion of a U.S.-based hedge fund, the ongoing US-China trade war and a fresh round of regulatory pressure facing the Chinese technology sector in the Middle Kingdom.

Last week some suspiciously large sell-side block trades had the market wondering if a larger player might be unwinding.

On Monday, those fears were confirmed when news hit the wires that Archegos Capital Management had experienced a margin call and wasn’t able to foot the bill. The failure to comply forced brokers working with Archegos to liquidate a series of large stock positions.

Included in the carnage were several U.S.-listed Chinese technology companies, as well as ViacomCBS (VIAC) and Discovery (DISCA)—the latter two were down more than 25% on March 26 alone.

It’s believed that stocks such as Baidu, Tencent and Vipshop (VIPS) were caught up in the forced share sales, which may have exacerbated their recent declines.

However, the slump in U.S.-listed Chinese shares started way back in February—meaning the Archegos story can’t be the only factor driving prices lower in the Chinese technology sector.

Looking beyond the Archegos story, another factor impairing Chinese technology listings in the U.S. appears to be linked to fresh regulatory pressures stemming from the ongoing trade war playing out between the two countries.

In the wake of Joe’s Biden’s victory over Donald Trump in the 2020 presidential election, one of the biggest questions facing the new administration was its stance on US-China relations.

At this time, it appears that the new administration isn’t planning to deviate significantly from the more adversarial tone set by the former president.

The U.S. Department of State, now led by Secretary Anthony Blinken, hasn’t shied away from shining the spotlight on hot-button political topics like the Hong Kong region’s autonomy from Beijing, and the plight of the Uighurs.

However, in terms of the financial markets, it appears that recent regulatory developments in the United States have also pushed US-listed Chinese shares lower.

As most will recall, Congress passed a new law at the end of 2020 that specifically targeted foreign companies listed on U.S. stock exchanges. It was signed into law by President Trump in December of 2020.

Known as the Holding Foreign Companies Accountable Act, the legislation is intended to close loopholes that had effectively allowed some foreign companies to trade on U.S. exchanges without complying with American auditing standards.

Chinese companies listed in the United States were viewed as one of the biggest losers from the new act, ostensibly due to the vast gulf that exists between American and Chinese accounting practices.

Leading up to the transfer of power at the White House in January, the Trump administration oversaw the delisting of dozens of Chinese companies from American exchanges. Now, the Securities and Exchange Commission (SEC) appears to be ramping up efforts to clamp down further on non-compliant foreign entities.

At this time, the SEC is collecting public comments on a process for identifying foreign companies that aren’t adhering to the necessary standard, a reality that might help explain why downward pressure on Chinese ADRs remains firm.

Moreover, a new requirement is that foreign-listed companies must document government affiliations may be exacerbating the problem for Chinese stocks, especially given the close relationship that often exists between the government and private companies in China.

Some foreign companies appear to have even established a “Plan B” due to rising listing uncertainties. Baidu, the popular search engine in China, recently raised more than $3 billion in a new Hong Kong listing. BIDU American Depository Receipts (ADRs) have cratered by as much as 46% since Feb. 19, 2021. 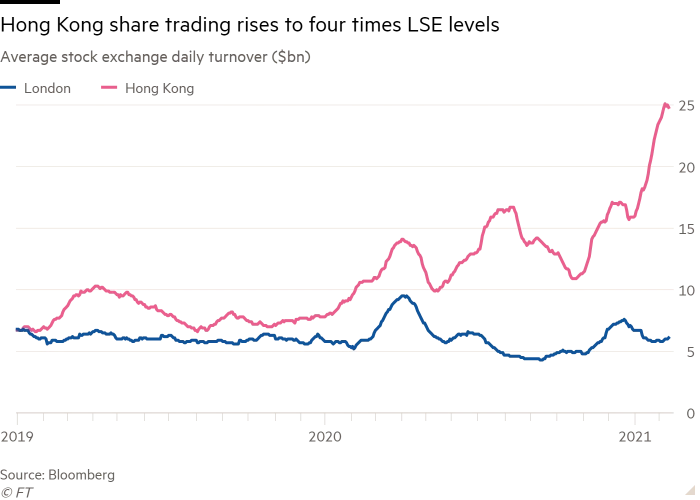 The move by BIDU to tap local capital markets follows closely on the heels of other Chinese companies making similar decisions in recent months. Alibaba, NetEase (NTES), and JD.com (JD) have all sought new capital via listings in Hong Kong in recent months. Shares in those companies’ ADRs are down 26%, 22% and 23%, respectively, from previous highs.

Considering the size of those corrections, risks in U.S.-listed Chinese shares have expanded proportionally. At this point, it’s impossible to foresee whether an improvement in U.S.-China relations could catalyze a rebound, or whether further downside is still in store for the group.

Aside from delisting pressures observed in the U.S., Chinese technology shares may also be feeling the heat from a tightening regulatory environment at home.

Not long ago, Chinese regulators delayed the initial public offering (IPO) of Alibaba-affiliated Ant Group. Rumors suggested at the time that Chinese regulators viewed Ant’s business approach as too risky and a potential “systemic risk” to the Chinese economy.

Since then, regulators in China have cast a wider net and appear to be targeting the broader tech sector, as opposed to just fintechs. This regulatory uncertainty has undoubtedly contributed to recent declines in Chinese technology shares as well.

On March 24, reports circulated that the Chinese government was considering a broad-based regulatory action that would require Chinese technology companies to establish joint ventures with the government to oversee and monitor their data collection activities.

Notably, it was this same type of close government association that first catalyzed the Trump administration to blacklist certain Chinese companies from doing business in the U.S. (on the grounds of national security).

Theoretically, that would suggest that if the Chinese government does bind itself further to its homegrown tech sector, U.S. regulatory pressure on that group could be compounded—increasing the risk of further delistings, or even outright blacklistings.

To learn more about trading international ETFs and ADRs, readers may want to review a previous installment of Market Measures on the tastytrade financial network.

To follow everything moving the markets—both domestically and internationally—readers are encouraged to tune into TASTYTRADE LIVE, weekdays from 7 a.m. to 4 p.m. CST.

Subscribe to Luckbox in print and get a FREE Luckbox T-shirt.